We are beginning the GAPS Online Reading Group with an article that explores one child protection social worker’s experience of bringing a written account of her work to a work discussion group. The group is the focus of a small research study and is attended by six social workers over the period of one year. Systems psychodynamic theory and methodical reflective practices underpin the research project, which considers the role of the work discussion group in responding to and containing the emotional and psychological dimensions of the work. We hope it will be of interest to you as readers and practitioners. 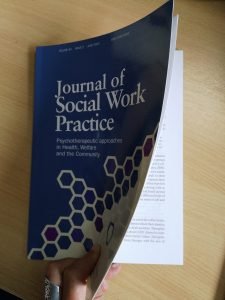 Having worked in various children & family contexts over 15 years, and then as an educator, this article resonated with me in relation to different roles, but also on different levels. Indeed, I’d even say that as I read it a second time and reflected precisely on those concepts and processes discussed in the paper (anxiety, defences, climate, pace, space), I had to catch myself to ‘slow down’ and make deeper connections. Specifically, I recognised a coherent defensive ‘fit’ that developed between my own practice and that of the agencies I worked within (‘enduring the work’ together). I recognise that whilst I actively denounced the sort of ‘depersonalised defensive practice’ (Hingley-Jones & Ruch, 2016) cited in O’ Sullivan’s (2019) paper, I was less aware of my own raft of defensive responses – none really identified, visible or accepted at the time.

I also recognise a preference for comprehending as a way to approach practice, rather than apprehending. So, I have a preference to understand something in a rational way, rather than through feeling or intuition. This is not to say I am not moved, consciously or unconsciously by intuition or feelings, or that I don’t pay attention to it in a conscious way. It’s just that defences against “the experience of emotional distress and anxiety” are usually a few steps in from of reason.

This information about myself was something that I gained from a work discussion group (more specifically from a SCT (Systems Centred Training event facilitated by GAPS chair, Juliet Koprowska) 15 years after becoming a social worker. O’ Sullivan’s paper reminded me of how safe and structured groups can provide both containment and challenge, and also made me wonder what my practice would have been like if I had taken up opportunities for group reflection earlier..

As an educator, I now engage in case-work discussion by proxy. I facilitate WDG’s as an educator, creating safe spaces for practitioners to recognise their responses to anxiety, and to consider practice more thoughtfully. This runs alongside and hopefully is complimentary to the supervision within the agency. That I did not experience the profound transformative potential of WDG’s until I left practice is not lost on me. I am curious as to whether I could have acknowledged my defences from within that context, and what it would have taken for me to apprehend, rather than simply endure, or defend against the pain inherent in practice.

Like Liz, I find myself responding to the article on different levels. As the person I am now and more painfully as the childcare social worker I was working in frontline practice during the 1980’s and 90’s. I remember the sense of struggling alone with the emotions and anxiety described by Katy in the absence of the kind of space and pace provided by the project. In the years since and at least partly as a result of intense emotional experience I chose to study on the same doctoral programme as the author developing and extending my understanding of the theoretical framework and learning from experience informing and shaping the research project and article. Making connections between the two has involved a kind of resurfacing and late processing of my own experience during these years.

back to discussion page

On Being and Becoming: Rogerian Approaches to Relationship Building and Eating Disorders

The importance of the therapeutic relationship in the efficacy of psychotherapy has become a widely recognized truth in the clinical field. Carl Rogers’, an American humanistic psychologist and theorist, greatly influenced this knowledge base with the introduction of his “person-centered” approaches to clinical practice. Broadly speaking, Rogers’ hypothesis is that the person who presents in psychotherapy already has within them the resources, knowledge, and wisdom needed for healing, and that it is the work of the therapist to facilitate a therapeutic relational climate that enhances the client’s ability to draw upon their internal resources in the pursuit of growth and change (Rogers, 1942). This approach is of particular interest when applied to the treatment of eating disorders and attachment trauma.

The term ‘midlife crisis’ refers to a phenomenon where a mid-point of life can trigger significant identity, relational and lifestyle changes. Hollis shuns the term ‘crisis’ and instead talks about ‘the Middle Passage’ as representing a wonderful, though often painful opportunity to re-examine ourselves. During the Middle Passage, there is an invitation for greater consciousness. I am a white woman and a social worker in my own middle-age. I started writing this paper in the last week of February 2021 after a close colleague, a black woman, resigned.

Learning from the Kindertransport Children’s Lives

This article by Patricia Higham discusses the experiences of the Kindertransport children, and argues that today’s practitioners can learn strategies for practice from the Kindertransport children’s lives, including how to diminish the incidence of post-traumatic stress, mitigate the impact of traumatic life events on vulnerable individuals and facilitate post-traumatic growth.

How to Make a Social Worker – reflections on social work education

I have recently left my job as a senior lecturer in a university to go back to practice with looked after children. It was a difficult decision and like most complex issues, the reasons for it were overdetermined. As the months pass in my new role, I have been reflecting on my experiences of working in social work education and considering them from my current position, as a practitioner.

Journal Article by Nicola O'Sulivan, with discussion by GAPS Trustees, Liz Reilly and Katharine Scanlan. Join in the discussion.

The First Editorial from the Journal of Social Work Practice

Reproduction of the first ever editorial of the Journal of Social Work Practice. Written in 1983, it asks some questions of social work in the coming decades. Are these questions still relevant today?

How do we understand relationships now?

A discussion which began during the first Covid-19 pandemic lockdown, when many social workers worked from home and met clients and colleagues online. Our Trustees, Nigel and Katharine begin the discussion with a longer view. You are invited to join in.

Do you have an idea for a short article you could write for GAPS?  We warmly invite those involved in social work practice and educators to think about what they would like to say to an audience with an interest in systemic thinking and therapeutic and relationship-based social work practice.

Our aim is to bridge the gap between practice and academic writing whilst opening up spaces for contemplation and stimulating discussion.

We encourage practitioners, educators and researchers to propose articles of 1,000 words or more for publication on this site and for discussion among our community.

GAPS Members are invited to apply for bursary funding for activities which support practice development consistent with therapeutic, systemic and/or relationship-based approaches.

More about the journal...